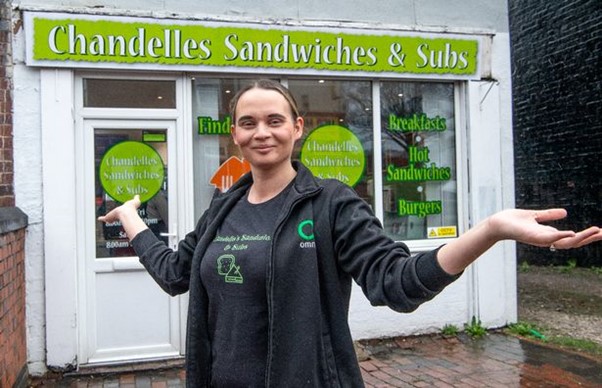 A mum-of-four has fulfilled her dream of opening her own sandwich shop.

She has worked in catering for 15 years and was previously the manager of a cafe in Cheshire.

The 29-year-old, from Alsager, said: “I am just your average girl. I decided I had always worked for somebody else, but I felt I was getting fed up with helping other people make money.

“I have got four children to support, so one of the reasons is to make their lives a bit better.

“With help from friends, I had got the money together to open up the shop. It took us four weeks to get it ready.

“I was previously working at Snack Shack in Crewe for the past year.

“I have got a couple of other girls working through the week, depending on how it goes.”

Chandelle is currently being helped out by former boss, Pete Davis.

She said: “I rang Pete and I said ‘You won’t like this, but I’m going to open my own business’ “I need to support my children.

Chandelle found her shop by looking on Facebook. She said: “I thought it looked nice. The rent and rates were also cheap. I fell in love with it.

“It’s been friends that helped me to get where I am now.

“I love cooking and I love making people happy and customers enjoying my food.”.

The shop is open from 7.45am until 1.30pm, Mondays to Fridays, and 7.30am until 2pm on Saturdays. It is also on delivery service Just Eat.